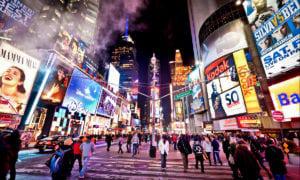 Digital signs sure have come a long way. Some may say they're a sign of the times, so to speak! Marketers have gotten really creative with the ways they engage their audiences, and companies all over the world have begun to adopt digital signs and LED wall signs as a means of creating memorable, interactive experiences for their audiences.

Once upon a time, digital signs were only used by big-dollar brands who could afford the installation and electricity associated with such investments. Today, the technology is not only more affordable—it reaps the rewards by way of substantial ROI when the messaging makes an impact on passersby. As reported by DigitalSignageToday.com, digital signs generate high recall with consumers. In a study conducted by Nielsen, 55% of respondents said they were highly engaged by digital signage, recalling the messaging nearly every time they passed a digital billboard. That's a big opportunity for organizations; when the messaging is right, digital signs can bolster brand recognition through the roof.

Here's a look at a few examples that have revolutionized the way consumers interact with advertisements:

Coca-Cola has long been known as a major innovator when it comes to branding. The company certainly didn't disappoint when it partnered with the music app Shazam to create an interactive customer experience unlike anything ever seen before. Using Shazam's ability to pick up on sounds and identify the artist (or, in this case, the company), Coca-Cola captivated audiences everywhere. Huge LED wall signs enabled participants at concerts and stadiums to enjoy the experience. After the fun was done, participants received a code for a free Coke Zero.

Travel has become a necessary evil for many people. When Moment Factory, a cutting-edge multi-media studio, partnered with LAX, the goal was to "bring back the romance of travel and enhance the travel experience," according to the firm's Creative Director.

It seems they've done just that! The Tom Bradley International Terminal at LAX now utilizes an immersive environmental media system (IEMS), which synchronizes passengers' flight information with applicable advertisements by way of a sophisticated content management system. Seven large-scale displays have been placed throughout the terminal, providing travelers with high-quality, immersive imagery that gets them excited about their upcoming destinations.

Coke makes our list again because they've truly figured out how to do digital signage right. In a campaign that took place in the heart of New York City, passersby were able to see their names and personalized stories on the gigantic screens that encompass Times Square. Through the power of social media, the soft drink giant empowered its consumers and created captivating, memorable experiences as the world stood by and watched. The "What's in a Name?" campaign was a huge success for consumers and the Coke company.

In an effort to generate awareness about homeless animals and promote adoption, U.K. animal shelter Battersea went to bat for its furry friends in a brand new way. Using a chip that was secretly installed in pamphlets handed out to shoppers on their way into the mall, the digital signage triggered the campaign's star canine to appear on screens throughout the shopping area as people wandered from store to store. The campaign operated under the hashtag #lookingforyou, pulling on the heartstrings of nearly every shopper who was followed by the pooch-of-the-hour. In case you're wondering, Barley, did find his forever home.

A few years ago, British Airways found a way to create a captivating campaign on a very prominent digital billboard space at Piccadilly Circus in London. Using a virtual little boy who's excited about all the airplanes flying over his head, the company incorporated a child-like whimsy that amplified the flying experience. As planes passed over the billboard, the little boy pointed excitedly, as the display showed the plane's flight number and destination or area of origin.

In South Korea, U.K.-based grocery retailer Tesco took to the challenge of making food shopping ultra-easy for these hard-working consumers. By placing large digital signage in heavily trafficked train stations, Tesco was able to capitalize on the busy lives of Koreans while saving them time and frustration after their work days were done. The digital displays are virtual grocery stores, showcasing aisles and aisles of products you'd find in the grocery store. While people are waiting for their trains to arrive, they can simply wander the stores' virtual aisles, scan the QR codes associated with their desired purchases, schedule a delivery time, and board the train. Once they arrive home, their items follow shortly thereafter.

T-Mobile made a big splash by cashing in on the Angry Birds craze back in 2011. The installation, which was set up in Barcelona, invited people to launch real-life monster-sized bird cannons. There was a digital counterpart, which showed a gigantic slingshot the way people who play the game are used to seeing it. Participants pulled the slingshot back on the kiosk; passersby were able to see the action on the big digital wall. Once the gamer lets go, both the digital display and the real-life birds went flying through the air.

For many people, trying on clothes is the last thing they want to do in their day. Premium denim brand DL1961 decided this struggle wasn't acceptable for its customers any longer, so it took to the world of digital signage to create a world that was primed for making people feel more comfortable in the fitting room.

The Digital Denim Doctor is a digital kiosk, which first debuted at Nordstrom on Michigan Avenue in Chicago. Customers quickly took to it, as it offered a safe way for people to express their body types and sizes without feeling self-conscious. The Denim Doctor then asks a series of questions, such as where the customer will be wearing the jeans, what weight of fabric they prefer, and which additional features they're interested in. An algorithm does the math and comes back with its suggestions, using a 360-degree view of the potential pair of jeans on the shopper's real body. Of course, if the shopper wants to try them on in real life, they're available right there in the store.

Mom may appreciate flowers or diamonds, but one jeweler found a way to tug on her heartstrings using digital signage. The "Really Big Love Note" campaign invited the public to post messages to their moms, which were then displayed on the East Coast Jewelry's gigantic digital display during Mother's Day week. Each message was displayed in real-time on the very busy I-95 highway. After a complete overhaul of the website, brand image, and advertising techniques, this approach was an instant success.

Are you ready to build a wall of brand awareness that can't be stopped? Digital signs and LED wall signs allow you to bring tomorrow's technology to today's campaigns. We invite you to learn more about how Stewart Signs' LED wall signs can change the way your customers see your company!