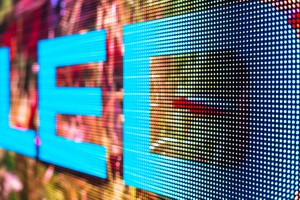 In addition to offering crisp images and compelling display options, LED video walls are also extremely energy efficient. They allow you to enjoy bright, colorful displays without driving up energy costs. In most cases, these screens take less energy to run than screens relying on alternative types of lighting. Here is what you need to know.

How Energy Efficient Are LED Lights?

According to the U.S. Department of Energy, LED lights use 75% less energy than incandescent lights, and they also last 25 times longer. That means you save on replacement costs in addition to saving on energy costs. As more screens, light bulbs, and other types of equipment switch to LED lighting, energy consumption is set to decrease by about 348 terawatt hours over the next decade, when compared to not using any LEDs. To put that into perspective, it's the amount of energy produced by 44 large electrical plants over the course of a year. Based on current electricity prices, that equates to a savings of $30 billion across the United States.

Why Are LEDs Energy Efficient?

LEDs don't use as much energy as other types of lighting sources for a number of reasons. In particular, they don't produce much heat, which saves energy. In contrast, 90% of the energy used by incandescent bulbs is wrapped up in producing heat, and CFLs release about 80% of their energy as heat. Particularly when they’re used in screens, LED bulbs can turn off completely. When a scene has dark spots, the corresponding LED bulbs don't emit any light, and that also helps to make indoor LED video walls energy efficient.

How Do LED Displays Compare to Other Displays?

To get a sense of how energy efficient an indoor LED video wall is, you may want to compare the cost of running this technology to the cost of running similar types of screens. Compared to projectors, LED walls use about half as much energy, and they also have lower operating and maintenance costs. LED screens are also more energy efficient than LCD screens. As implied by the name, LED screens feature numerous light emitting diodes (LEDs). To display images on the screen, these diodes emit different levels of light, and for some images, they don't have to emit any light at all. This fact keeps costs low. In contrast, LCD screens feature a fluorescent tube behind the display. This lights up the pixels on the screen to create the images. Because the tube is always emitting light, these screens tend to use more energy than similar sized LED screens.

Want to learn more about the energy efficiency of indoor LED video walls? Need to compare the potential energy consumption of various sizes of LED displays? Then, contact us today. At Stewart Signs, we offer high quality signage and video wall technology to our customers so that they can engage with their audiences more effectively and rise above the rest of the competition in their fields. We focus on providing indoor video walls and signs to churches, schools, nonprofit organizations, and more.

Top 5 Ways to Recruit Members with Your Outdoor Sign

How LED Signs Can Help Your Church Have a Successful Reopening

7 Ways Your School Can Fundraise Safely

Giving Back in Honor of a Loved One

Use It or Lose It: School Budget Deadlines