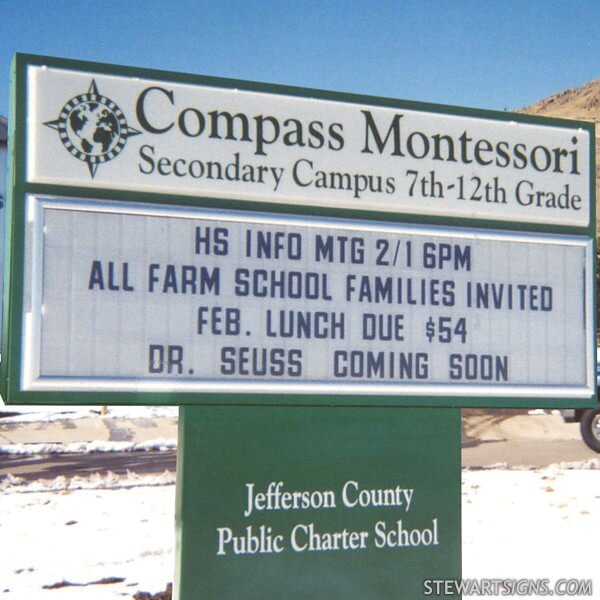 Parents, as Well as Staff, Know the Value of a Great Communication Tool

Tammy Pfeifer and others at Compass Montessori knew that they needed a better communication tool. After some deliberation it was decided - what better than a school sign? Something that was always there to communicate messages to parents and the community was worth its weight in gold. When the hunt began to find a sign company, Tammy received a recommendation from a local school. "That's actually why we ended up going with Stewart Signs," said Tammy. "Nothing makes you feel more comfortable than a third party that endorses a company because of their positive experiences."

Tammy learned firsthand why Stewart Signs has been in the sign business for so many years. "It was a great experience - honestly, not a single problem. Stewart Signs made it so easy. Our consultant was wonderful and always there to answer any and all questions. When we said we didn't have the funds immediately available and that we'd have to raise them, we never felt pushed. Our consultant just wanted to make sure he was doing everything in his power to help us in any way that he could."

The school used two venues to raise what they needed. "We hosted bingo and ran a concession stand at local football games selling pizza and hot dogs. We raised the funds in about six months and it was much easier than we thought. The thing is, when parents at the school heard that the fundraisers were for a school sign, we had an influx of volunteers to help out for them." This responsiveness only showed Compass Montessori that the parents also saw the value that a school sign would deliver.

And how has the sign been received? "The parents love it because they now know what is happening at the school. It's the most effective communication tool we could ever have. We have a website, but parents don't always check that - they see the sign every day. I can't count the number of people that have thanked us." When asked about her overall feeling of Stewart Signs, Tammy said, "It was such a smooth process. I am so glad they were referred to us, and now I know why. After our experience, I'll be sure to do the same."