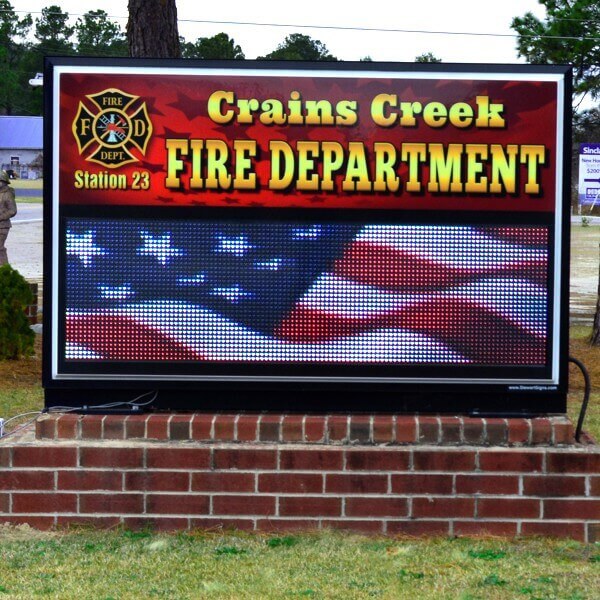 
Our LED signs come with over 800 graphics in our cloud-based library. Learn more.

Kenneth Macky, Fire Chief: We've had a great experience with Stewart Signs. They always contact us back in a timely manner to get everything situated. Well, we had the old marquee type sign and we were pleased with it, but we couldn't put on everything going on with the department at that time, all the events we had going on. So we started looking around and thought a digital sign would be the best way to go.

Seeing some other departments with digital signs online and stuff like that we said that that would work great for us, changing out different things on the sign. The decision process took a while. We had different companies, were looking at different companies and different prices, different size, different makes of signs, what they were made out of, what type of material the frame of the sign was made with, and of course the budget, what kind of budget we could afford with it.

And luckily we got a grant to buy our sign with, the FEMA grant, which is available for all the fire departments to apply for. And it's a challenging grant but everybody can apply for that grant. And we were lucky enough to get the grant to pay for that sign for us, but we were looking at different companies and everything on it. Whether it was wireless or not wireless. And that was some of the things why we chose Stewart Signs to go with because it's got the wireless with it and we'd be in the office and type it up and put it on the side without having to go out in the rain. With the LED, we can change, and have more things going on at one time on the sign than with the marquee. With the marquee you can only put certain letters on there and that's all. One event was all you could put on there. So we went with the digital so we could change the events throughout on the sign.

There's a lot of advantages of having the digital sign. One thing it's easier to see at night compared to the marquee type signs. The lettering is digital so it shows up better for people going down the road. It changes out, we can put five or six different events on our side compared to the marquee type with the one. It's really nice, you can put the digital movies, you know the film on there where it's actually a motion showing different things on the sign compared to just the letters being up there. You can make the sign go in and out. Different features of the sign is what really excites us about it.

Yes, everybody was excited about it coming in. We were actually the first department around the area to have one and we've been contacted a few times about our sign wanting to know where we got it, how much it was, and all that kind of thing. It's been a great experience. We've really been pleased with the product itself, the cooperation we've had with Stewart Signs working with us through the time period of our grant. You know, we had to get the information then get it to the grant people and all this kind of thing. And the process alone, they helped us a great amount with the process of it.

It was well worth the effort and expense. We've had great luck with it. We use it for other things other than just advertising, like smoke detectors and stuff like that. We used it also like during hurricane Matthew, we use it as a billboard sign for letting people know if they can come back to their home or not. And we used it when FEMA was coming in, we'd put advertisement on there for FEMA being here for the homeowners to come see FEMA. I mean it's come in handy for other things other than just advertising things for the fire department itself. Stewart signs was the company that we chose to go through. Great people to work with. Talk to Stewart Signs.