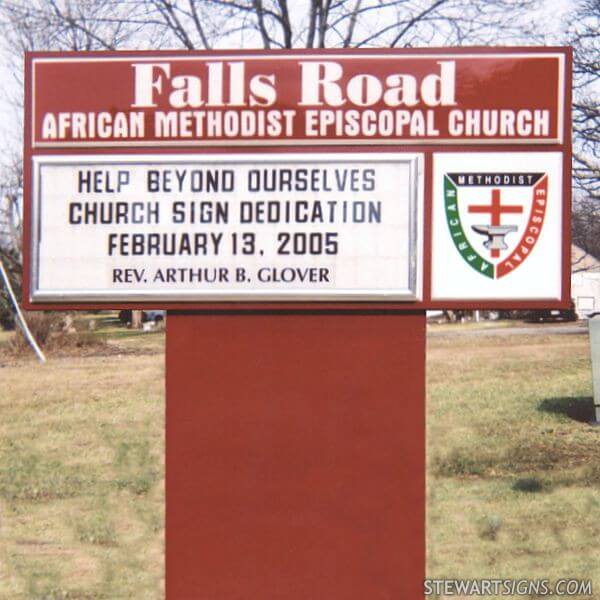 When Falls Road African Methodist Episcopal Church narrowed their search for a sign company down to two, the right choice for them became increasingly clear. "The experience with Stewart Signs was pleasant from the start," said Leander Scott, a Trustee at the church. "They explained each aspect of the process so that we felt comfortable with everything. From assuring us that we were getting the right color, to knowing that the delivery was on schedule, all of our questions were answered right away. In contrast to Stewart Sign's attention to detail, the other company began looking like they were just after a quick sale."

This became increasingly apparent for Mr. Scott as the issue of available funds arose. "We're a small congregation, and sometimes the money for something like this isn't immediately on hand. Our consultant never made us feel rushed, but instead let us raise the money and put down what we could afford. The other company we spoke with had a 'when are you going to purchase, now or never' attitude. Our experience with Stewart Signs was more informal, and consisted of information gathering. Our consultant had a variety of questions for us - to help us identify our needs and decide what types of signs we should be looking at. Stewart made it easy for us to choose the sign that suited us best. After all, they've been doing this a long time, and they took into account things that we'd never even thought of."

The final decision to go with Stewart came when they received a strong referral from another local A.M.E. Church. The Senior Pastor there also happened to be Mr. Scott's sister-in-law. "She solidified our initial feelings about Stewart Signs. They had purchased a sign from Stewart and were very pleased. Getting such a positive review from a customer that also happened to be a family member made a huge difference."

After deciding on Stewart, they picked out the color and type of sign best for their church. "Our consultant sent us a color rendering with the style and lettering just as we had asked. It eased the committee and reassured us that we were getting exactly what we wanted. We were also very nervous about installation, but our consultant told us to ask around the congregation. We were shocked at the number of people who stepped right up. One was in the concrete business, another an electrician - it was easier that we could have imagined." The sign for Falls Road was ordered and ended up being finished early, and was installed without a hitch.

However, the Stewart commitment didn't stop there. "When we received and installed our sign, we weren't forgotten. Our consultant called us to make sure that we had everything we needed, that we were happy, and that the installation went well. It was the following through that really let us know we made the right choice. We never felt like just another sale." Once installed, the community embraced the new Stewart sign. "We've gotten a lot of praise for it", said Mr. Scott. "It's become a 'sweet spot' on the corner because it's such a classy, well-made sign. The county even asked us what took us so long! We're so glad we went with Stewart Signs."