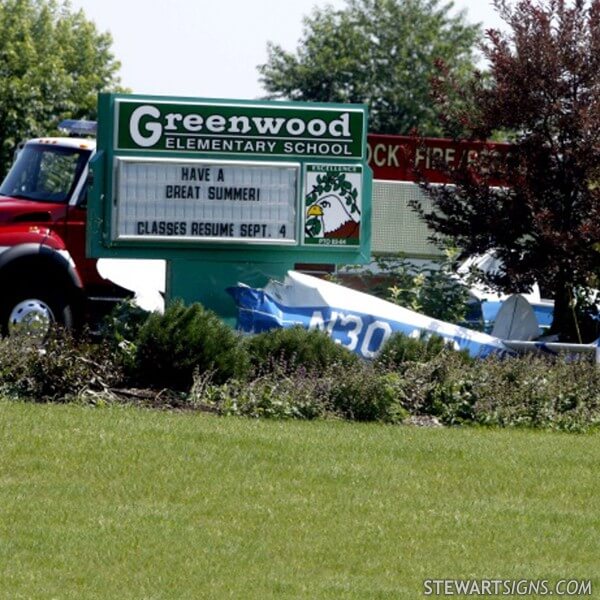 Stewart signs are made to stand up to many adverse conditions. While airplane crashes are not necessarily one of them, you wouldn't know that based on what took place in Woodstock, IL, a quiet town 13 miles south of the Wisconsin-Illinois border.

A single engine plane began experiencing mechanical trouble shortly after takeoff and attempted to return to the airport. Witnesses were startled by how low the plane was and reported seeing it come in between a power line and a barbed wire fence, grazing both. The plane, a single-engine Forney F-1A Aircoupe, then crashed into the sign in front of Greenwood Elementary School at 4818 Greenwood Rd., a halfmile south of the airport, at about 9:10 a.m.

Amazingly, both pilot and passenger were able to walk away from the crash, though the aircraft sustained extensive damage.

While the plane crash is a first, Stewart signs have endured many other dangerous situations. In 2005, a Stewart LED sign withstood Hurricane Katrina and spent three weeks in water. Once electricity was restored, the sign powered right up, displaying pre-Katrina messages. In Missouri another Stewart sign survived an F4 Tornado without damage, an eerie presence among downed trees and demolished buildings.

This type of quality comes from dedication and meticulous workmanship. Stewart signs are made to exacting standards with high quality materials and each is engineered to withstand hurricane-force winds.

While we of course hope a Stewart sign will never again be tested in such an extreme manner, we are proud to provide our customers with a quality product that will stand the tests of time. The sign at Greenwood Elementary School stands undamaged as a testament to the excellent choice the school made investing in a Stewart sign.