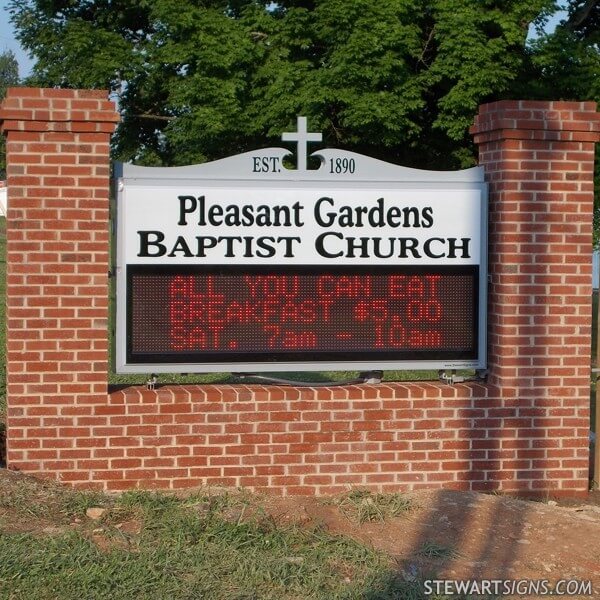 Our LED signs come with over 1,000 graphics in our cloud-based library. Learn more.

Increasing Visibility in a Growing Community

Nestled in the foothills of the Blue Ridge Mountains in western North Carolina, the town of Marion is truly in God's country. Deacon Carroll Proctor enjoys telling a joke about a Baptist minister who traveled cross-country from California to Marion. Early in the journey, he stopped at a little chapel that had a red phone with a sign reading, "Calls to God - $100 per minute." As he continued his journey, the minister kept seeing these church phones, all costing $100 per minute. Upon arriving at Pleasant Gardens Baptist Church in Marion, he saw a red phone, but no sign. "Why does it cost $100 per minute to speak with God everywhere else, but here it's free?" he asked. The answer: "Because here, it's a local call."

With a population of less than 8,000, Marion is a small town, yet it is the fastest growing community in North Carolina. This presents an opportunity for Pleasant Gardens Baptist Church to grow its congregation. Situated on a side road, the building does not enjoy high-traffic visibility. Early in 2012, the church decided to create a presence on the main road, Route 70, as a way to attract new members and publicize church events.

Deacon Proctor spoke with administrators at other area churches, and based on their experiences, expected to pay $30,000 for a quality sign. He researched and obtained bids from ten companies, including Stewart Signs, which another church had used and recommended. Fully expecting to pay $30,000, Deacon Proctor was "tickled pink" to learn about Stewart's TekStar Full Color LED option. He found he could purchase a high quality, effective sign for less than $15,000.

Proctor worked with his Stewart sign consultant to review available options and ensure the best possible price. "Working with him was like meeting up with an old friend," says Proctor. "The sign was so cost effective. It really felt like a good deal. The congregation loves it and sees it as a blessing." They, too, are "tickled with it."

The church opted not to display the sign on a pedestal. Instead, a team from the local high school built a brick structure for it, with a base and two pillars. "With instructions from Stewart, the installation was a piece of cake. It could not have gone more smoothly," says Proctor.

Church traffic has increased since the sign went up, and approximately six new couples have joined the congregation. A sign committee determines what messages can be displayed. The basic rule is that church events, such as breakfasts and times of services are advertised, but not private events, such as weddings.

Deacon Proctor is happy to recommend Stewart Signs to others. He tells colleagues, "You can't get a better sign for a better price." Not even in God's country.