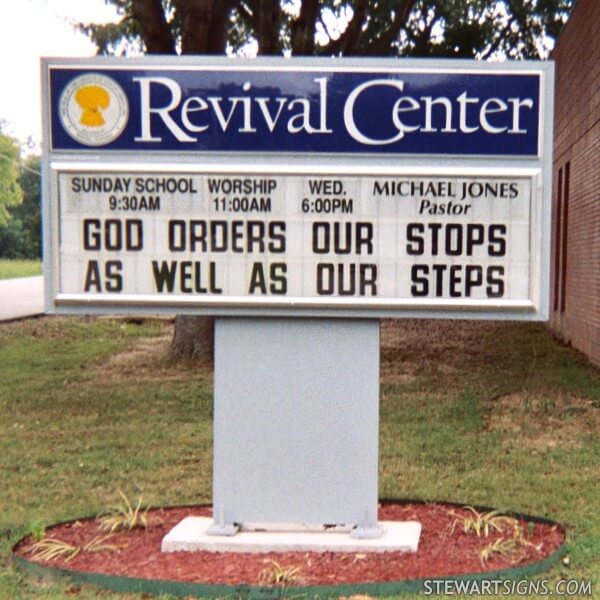 When Pastor Michael Jones and his church decided to make the move to their bigger facility, they knew that such an establishment could not go without the appropriate signage to represent the new church building. From a church that began in 1974 out of a mobile home with merely a handful of members to a ministry leadership passed down through the Jones family, The Revival Center Church of God in Christ has always been defined by the fellowship of its faithful members.

After forming, the church eventually moved from the mobile home to a small chapel in Monticello, Arkansas, but once again outgrew its capacity with the continuously growing number of attending members.

Once Pastor Michael Jones took over the leadership designated by his father, Founding Member Elder Nathaniel Jones, Pastor Jones acknowledged the need for a bigger facility space to house his congregation and church-sponsored activities, which included the 8-week Camp Benae Summer Camp. The trustees and Pastor Jones knew that a sign would be necessary to let people know where they were and who they were, since the new building only had letters on the side and no distinct signage facing the drive-by traffic.

Referred by a fellow man in Christ and satisfied Stewart Signs customer, Pastor Jones contacted Stewart Signs to make arrangements so that he could have the sign delivered and set up before the church even officially moved. "Installing the sign before the move helped a great deal with our congregation" Pastor Jones says. "The customer service was amazing. Stewart Signs was very accommodating." Pastor Jones was also pleased with the church payment assistance program at Stewart Signs: "It wasn't strictly business, but more of a partnership. You could tell they're used to working with churches."

Stewart Signs offers two variations of a 10-month payment plan, one of which is interest free, for churches when they are able to pay 25% down. Pastor Jones was pleased with his payment plan choice, considering the church was enduring the expenses of their move right before purchasing the sign.

With an entire half block span of church facility, the building itself is hard to miss, and now because of their Stewart Church Sign, it is even more unlikely this church will be overlooked. The growth of the Revival Center Church of God in Christ has been ongoing throughout its history and with their new church sign from Stewart Church Signs, the congregation will surely continue to prosper in its numbers and in its faith.