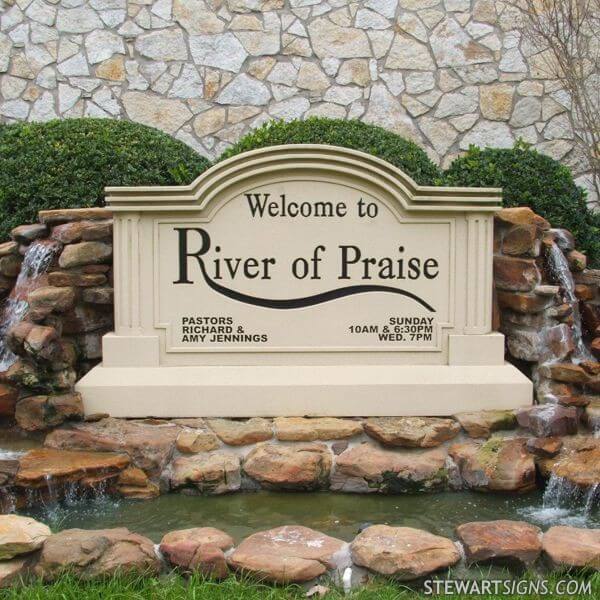 "Your company understands vandalism, and churches appreciate that."

"Apparently somebody doesn't like my preachin'," jokes Pastor Richard Jennings when he talks about his recent spate of vandalism. "But we're talking local kids here. I guess vandalism is inescapable irrespective of where you live in America."

Let's run down the sordid details: First they tipped over the church's picnic tables. Weeks later they threw rakes, hoes, and other gardening tools into the fountain.

The vandals, though, kept upping the ante.

"When they opened an entire box of laundry detergent into the fountain I knew they were turning a corner in their merrymaking," laments this easy-going homegrown Texan.

Tomball, Texas is a peaceful, leafy suburb north of Houston. It's the kind of place just about anybody wouldn't mind putting down roots. River of Praise Church sits as the jewel of Boudreaux Estate Drive, welcoming all into their fold to praise Him. Pastor Richard, with wife Amy, has been spiritually connected to this special place for nearly a quarter century. Presently more than eleven hundred believers feel the same connection.

In 2003 the pastor and Amy together landscaped a striking waterfall fountain in front of the church; choosing as the centerpiece a Stewart Signs Cornerstone model. A few years later they fashioned a Stewart Signs LED cabinet into the Cornerstone sign as an 'add on'. "Our sign is unique to say the least," Pastor Jennings readily admits.

While driving into the church lot the morning of November 12th, 2007, Pastor Jennings noticed that the lower-left section of the LED sign wasn't functioning. Walking to the sign he understood why.

"The vandals were back, and they didn't hunt for picnic tables this time," Pastor Richard had to conclude. "They thought they could destroy our sign, but they thought wrong."

Apparently these Tomball ne'er-do-wells thought they could take out the electronic sign with a baseball bat. "They hit the sign display hard multiple times to be sure. The brunt trauma of the blows caused one of the internal ribbon cables to jar loose from its connector. That's how hard they hit it!" amazes Pastor Richard.

"But the lens protecting the individual red LEDs didn't break, dent, or dislodge. There isn't even a scratch on the lens! Without the lens the individual LEDs would have been destroyed. The sign met the baseball bat and sent it packing!"

Himself a former quality-control engineer for Compaq computers, Pastor Jennings simply reconnected the fallen ribbon cable inside the sign and, well... end of story.

"I didn't even have to order a single replacement part from Stewart Signs," says Pastor Jennings. "But you guys will be hearing from me in a few months. We own the fifteen acres across the street. We are planning a new 2,500-seat sanctuary for that property and we'll need at least one sign. We're pulling permits right now. Expect a call."