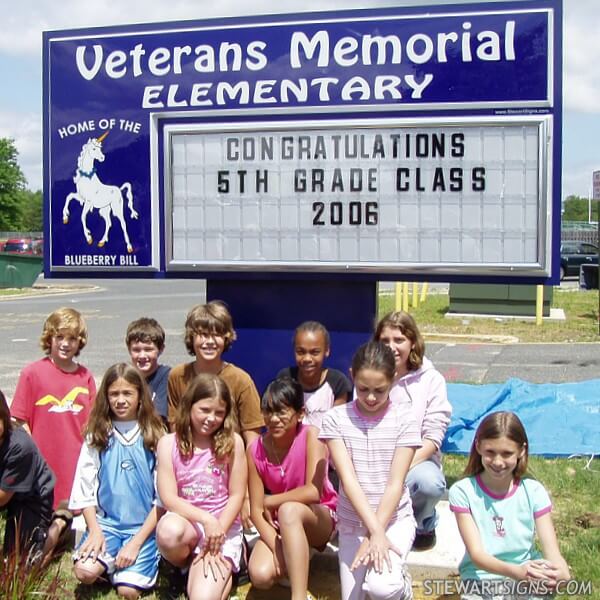 The speeches are rehearsed and ready. The microphone is plugged in and working fine. Standing silent, a new school sign remains covered with a blue tarp, awaiting its spotlight. The ceremony is just about underway. This day - a day these fifth graders have worked so diligently toward for more than two years - has finally arrived. Veterans Memorial Elementary School is proudly unveiling their new school sign.

Pride is a virtue these students have earned through involvement in numerous community projects since they began fourth grade. Teachers Gail Damiano and Suzanne Kurasz instill in their students the importance of giving back to the community. "This particular group of children, though, went far beyond the already high expectations we have for our fourth graders," Gail stresses. "The entire state of New Jersey sat up and took notice of the list of their accomplishments."

And that list is long. The children raised a very large sum of money in the fall of 2005 for Hurricane Katrina victims. A year earlier, as fourth graders, they raised money to purchase bulletproof vests for the local police department.

But Gail wants to emphasize the activity these children are most known for. "They single-handedly convinced the New Jersey State Assembly to proclaim the blueberry as the official state fruit."

The arduous efforts of these gallant fourth graders to coax state legislators to officially proclaim the blueberry as New Jersey's state fruit is, well, a story all itself. Suffice to say that the New Jersey "Blueberry Bill" indeed reads, "inspired by the fourth grade classes of Gail Damiano and Suzanne Kurasz of Veterans Memorial Elementary School of Brick Township; Dr. Alyce Anderson, principal."

The governor signed the bill into law in January 2004.

Graduating up to fifth grade in the fall of 2005 these same students felt that a new school sign out on Hendrickson Avenue would provide the school with an effective way to communicate with motorists. Of course, any new sign would not only have to feature the Blueberry Bill, but the school's unicorn mascot as well.

"We worked closely with Stewart Signs to obtain the exact style and design we had envisioned," Gail happily recalls. "Like the students' dealings with the state legislature, we made the sign design a civics lesson. The entire school got to vote on which design would ultimately grace the front of the school."

Gail chuckles, "We really had the art department at Stewart Signs jumping through hoops. With input from our students, Stewart Signs came up with numerous versions of our beloved unicorn. The kids wanted to see him either as a youthful creature or a mature-looking unicorn. As we weren't sure, Stewart's art department really helped us whittle it down to three different designs. At times I felt I was torturing their artists, but it was nothing of the sort! Stewart Signs is not the kind of company that walks into a school and says, 'this is the sign we're selling you and that's it'. Our school and Stewart Signs designed the sign in concert."

On Election Day the unicorn issue was put to a vote. All 700 members of the student body dropped votes into a ballot box set up by the school store. The overwhelming winner was the mature-looking unicorn.

"It had come full circle," Gail pronounces. "From the student-initiated effort of acquiring a state fruit for New Jersey to having a say in which sign would sit in front of the school, these children thoroughly enjoyed participating in the American process."

The school's PTA had previously raised sufficient funds for the sign using the "Box Tops for Education" program through General Mills. One-hundred percent of the purchase price of the sign came from the program.

But now, the unveiling ceremony is about to begin. One by one, five fifth graders recount a story only they could tell. It's a story about hard work, community involvement, and the achievement of a set goal.

Speeches made, the blue tarp is pulled back to reveal their new school sign. The message board quite fittingly reads, CONGRATULATIONS 5TH GRADE CLASS.

"These kids have certainly earned our congratulations," concludes Gail. "They truly know what it means to make a difference."