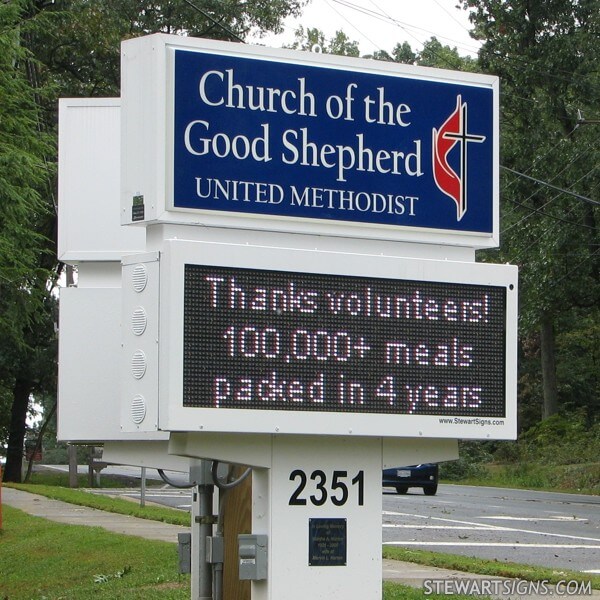 Endorsed Supplier for the

Our LED signs come with over 1,000 graphics in our cloud-based library. Learn more.

Overcoming the Odds: How one church rewrote their county's LED sign regulations

Fairfax County, Virginia is like many other areas in the country; their zoning regulations have strict requirements for the height, color, location and use of signage. When the Church of the Good Shepherd purchased their sign, they were diligent in observing them all - until they made an exception during a severe heat advisory. One of the county's regulations stated that a LED message center can only display two messages in a 24 hour time period. The Church of the Good Shepherd United Methodist helped to change that earlier this year.

The Church of the Good Shepherd United Methodist set about replacing their changeable letter sign to a more attractive and dynamic sign in order to reach out to those passing by the church. Merv Norton, a member of the church, chose to work with Stewart Church Signs and completed the purchase of a DayStar LED sign in 2011. He donated the sign to the church and made sure to work with them to follow all of the county's requirements. They filed and were granted the necessary permits, designed the sign to fall within the requirements of the zoning codes, and installed it in front of the church as regulated by the county.

After the sign was installed, the church was verbally told about a county restriction on the use of the sign; no more than two messages can be displayed within a 24 hour period. At no time during the permit process was this limit mentioned to the church or Merv Norton. Needless to say, they were astonished at this regulation as many other organizations on the same street had LED signs that displayed more than the allowed number of messages. Members of the church and Norton both immediately felt uneasy about this restriction as it was a form of discrimination allowing other nonreligious organizations to display more messages without fear of reprisal.

In July 2012, the county sent out an inspector to observe the sign and check that it was complying with all requirements. While the Church of the Good Shepherd displayed minimal messages on its new sign to comply with county regulations, on this particular day the inspector witnessed three messages on the sign. The DayStar sign read "Practicing the Presence Thursday July 5, 1pm", "Visit Us at goodshepherdva.com" and "WELCOME, Come in and Beat the Heat". Consequently, the church received a code violation for the third message playing on the LED sign that advised the community of potentially harmful weather conditions and opened its doors to neighbors experiencing power outages.

A lawyer and loyal member of the church decided to appeal this violation and set forth to file a lawsuit against the county. Not only were other organizations disobeying the regulation and not being fined, but the church felt that this requirement limited their freedom of speech and violated their religious rights. The lawyer based the suit on RLUIPA (Religious Land Use and Institutionalized Persons of Act of 2000), which states:

"No government shall impose or implement a land use regulation in a manner that imposes a substantial burden on the religious exercise of a person, including a religious assembly or institution..."

"Under the county's restrictive policy, the church must pick and choose which of its various functions can be displayed on its sign each day. Such an impact is a substantial burden on the church's religious exercise."

The lawsuit stated that the county's ordinance violates RLUIPA which prohibits zoning rules that place undue burdens on religious institutions. In addition, the church's attorney said that the limit was applied arbitrarily. Other organizations in the county were allowed exemptions for messages that displayed the time or weather information. Although the county provided the church with examples of past cases in which the rule was enforced, a county spokeswoman said that in paying closer attention to LED signs around the time of the lawsuit she had seen several without time or weather information that did not comply with the 2 message per day regulation.

Members of the church think that the violation may have been prompted by an anonymous caller that complained to the county about the church's LED sign. The church feels they were singled out because of one person's mindset against LED signs in the county, especially because the message pertained to weather conditions and invited the community in, when many were without electricity at the time.

Later that year, the courts found in the church's favor, agreeing that a substantial burden was placed on the religious exercise of this organization.

By imposing this regulation, the county limited the church's freedom of speech to promote their religion and services to the local community. They were also discriminating against a religious institution by allowing other organizations to disregard the restriction. The county rescinded the violation against the church and they are now able to display multiple messages on the LED sign each day. The county also decided to revisit the 20 year old zoning code and will consider updating the regulations to be applicable for today's technology. Thanks to some hard work and diligence, Good Shepherd's messages now shine brightly in Vienna, Virginia.

Do you feel your church has experienced similar discrimination? Here are some questions to consider when deciding if legal options should be evaluated: