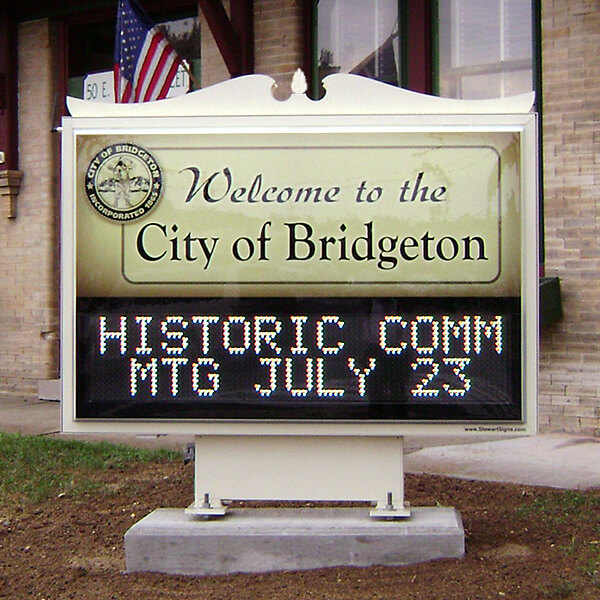 
Our LED signs come with over 800 graphics in our cloud-based library. Learn more.

As warnings of Hurricane Sandy began to bellow up and down the East Coast and residents were told to prepare for the worst, the City of Bridgeton was able to take a proactive stance in warning their community. Thanks to an LED sign provided by Stewart Signs just months prior to this horrific storm, Bridgeton was able to keep its residents informed. With the expertise of Stewart Signs, the sign was strategically installed at a main intersection where messages are easily visible.

"The sign was important because it was in a pretty prime location in our community as far as vehicular and foot traffic," reported Kevin C. Rabago, Sr., Director of the Office of Development and Planning for the City of Bridgeton, NJ. "We were able to use the sign to get out public service messages on everything from available shelters, to trash pick-up, to who to call for various emergency management things that the community might need."

Rabago and the employees with the City of Bridgeton realized what an impact their new sign had during this tragic period and were pleased with the options and functions they were able to utilize with the sign. Rabago's realization was, "We've got this sign now, this is a situation that is perfect to use it for. We highlighted some things in red, put some things in yellow, we had it flash, whatever it took to help our residents get the information they needed."

The timing couldn't have been more perfect to have this sign in place. When making the choice of the sign company that was right for the City of Bridgeton, Rabago says, "The ability of Stewart Signs to really help us personalize the product and the use of the product was a decision maker. They provided first class customer service all the way down the line."

The City of Bridgeton has received many compliments on the appearance of the sign, as well as compliments on the informational aspects. The residents are also keeping the city on their toes and calling in to let them know when they've misspelled a word. I guess that is reassurance that the community is really paying attention to their new sign.

Rabago is so pleased with the seamless service he has gotten from Stewart Signs, that he has referred them to a church that was looking to install a sign, and a non-profit organization that inquired on where they got their great looking sign. He is always sure to give the name of his Stewart Signs consultant, as the consultant delivered service that was above and beyond the norm.

The City of Bridgeton, as a community, is happy with their sign and thankful for the information relayed to them on a daily basis. Rabago proudly reports, "Stewart Signs did good by us!"