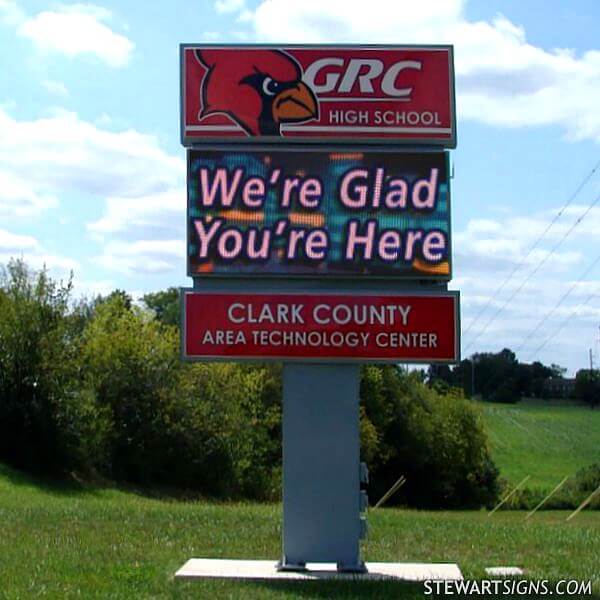 Our LED signs come with over 700 graphics in our cloud-based library. Learn more.

David H. Bolen, Principal: Obviously moving into a new school we wanted a sign that matched not only the size of our school but the facade. We were very much interested in getting away from the traditional marquee signs and that's one of the reasons why we went with the LED.

We formed a committee, it was made up of some school members as well as community. And school board people were involved in the selection process. One of the big things I guess with this sign was we were concerned about the size of the sign and how it fit in. We were also worried about some of the neighbors in the area and we wanted to make sure it sit in well with the community. And actually, I think it matches well with the school.

I think some of the main things we were looking at when we were researching signs was a company that had a reputable reputation, somebody that stood behind their product. We had some conversations with the people at Stewart Signs and actually had some onsite support that came from them as well as the online support. They were very friendly both times I picked up the phone to call to ask questions. We actually had the photographs and places of signs, similar signs that had been installed.

Obviously we were aware of the cost, but we also wanted a product and a sign matched our school and suited with our school. Obviously moving into that new building, we want something nice. We do have a large school here of 1,700 students. I mean, it wasn't a cheap time, but it wasn't astronomical. It fit well within the budget. I think the most exciting thing to me with the marquee behind us is the fact that we were able to promote our students. It means a lot to a kid to come in the morning and see their name up in lights.

We're also beginning to explore a little bit with the community. There's the possibility of us maybe having some revenue come in. The school is actually using it as an advertising tool for some of our local businesses. We've used Stewart Signs tech support a lot to help us get started. We do a lot of...I've got an assistant, administrative assistant who does a lot of the programming of the sign, and I know she's been with him several times. I don't think we could've gotten a better product on the market. We've had nothing but positive experiences with the sign, and I think it's perfect for us. I think looking back, we probably couldn't have done anything any better than what we've done.

I think if you're looking at sign, I think you need to dream big, look big. I think LED even though it's a little bit more expensive is the only way to go because you have a lot more options. I think the product that we have will serve us well in the years to come. So I would encourage anybody to look this route and to look at Stewart Signs. They've been really, really good to us and I think that can be a testimony to their product.