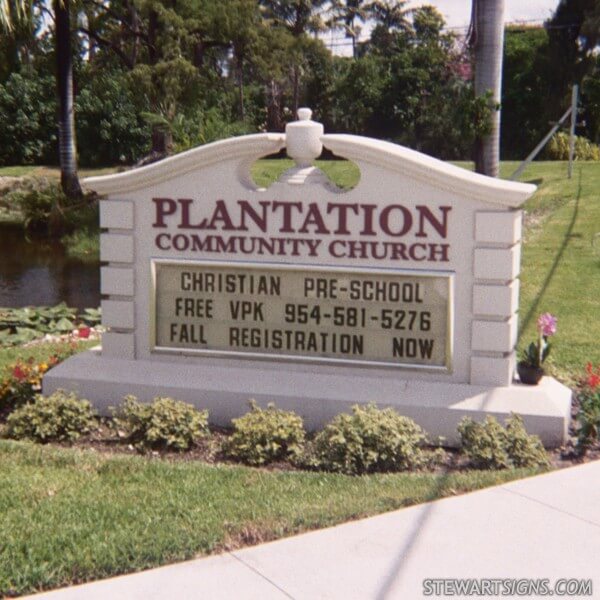 "Our sign is an essential outreach tool," Says Pastor

Several years ago Plantation Community Church in south Florida received an out of the ordinary telephone call from someone in the community. "I have a complaint," issued the calm female voice at the other end of the line. "I had to drive around your block twice to read the interesting message on your church sign." Pastor Chip Plank wasn't taken aback in the least. He knew the kind caller meant well and was, in fact, complimenting the church's good intentions to connect with the many people who drive by every day.

"We're known around town as 'the church with the messages'," confirms Pastor Chip. "And that nice lady calling in proves it. We're connecting."

Plantation Community Church changes their message weekly. Around the church the task is known affectionately as "pulling the sign." This good pastor from the city of brotherly love is very proud that his church does not repeat messages which are displayed on the sign. And Pastor Chip truly knows 'what went up and when' because he has maintained, since the nineties, a spreadsheet of used messages. "Even if we really like a clever message seen on another church's sign, we won't wait several months and post it as 'fresh' on our sign. There shall be no reruns, period."

In 2006 the church set about to change the appearance of the front of the church to maximize exposure to the some seventy-thousand cars which pass by daily. "We had had two Stewart Witness-model signs working in tandem for over fifteen years, and they'd served us well. One was out front and the other is still in use in the rear by the parking area. Still, we were due for a new look."

Let's rewind a bit. Pastor Chip had already been preaching at Plantation Community Church a full two years when the church purchased the two Witness Standard signs in 1992. "I recalled how pleasant J.M. Stewart was to do business with, so I pulled the file here in my office and rang them. There was never any question of who we were going to buy our new sign from. We didn't even Google around the web. I just picked up the phone."

"I feared that it was going to be a problem, maybe," explains the pastor. "But the sign consultant at Stewart found just the solution in order for our church to be in compliance with local signage codes."

That solution was a Cornerstone model sign by Stewart Signs. "It's a beautiful sign from an operational standpoint," reports Pastor Chip. "We wanted very much to continue with our changeable messages. Our sign consultant at Stewart Signs had their art department include an ample message area in the new design. A clear Makrolon® vandal cover locks down and protects the letters not only from potential ne'er-do-wells but from the weather too."

Plantation Community Church installed their new Cornerstone sign in May 2007. "Already, another church in town has rung me to ask where our new sign came from," the pastor timidly boasts. "You see? Even though it's low to the ground the sign gets noticed. Sure, it's a different look, but it's a new look. A fresh look."

The day this interview with the pastor took place happened to be "pulling the sign" day.

"I've got to go," Pastor Chip says, politely excusing himself. "We have a great message planned for the sign this week. I've got to pull that sign right now in case that lady drives by today."