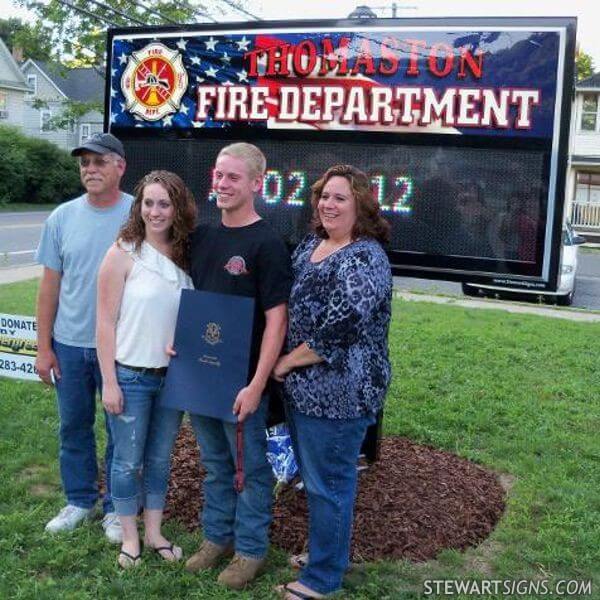 
Our LED signs come with over 1,000 graphics in our cloud-based library. Learn more.

At Stewart Signs, we often hear of the hard work and dedication needed to raise funds for a new sign. For Thomaston Fire Department, these efforts were not made in vain. Sixteen year-old Jordan Terrier spearheaded the project that replaced the department's old changeable letter sign with an eye-catching LED message center in memory of his brother.

In 2006, tragedy struck the Thomaston Fire Department when one of their own was killed in a tragic motorcycle accident. James Terrier, Jr. had been a firefighter for less than a week and was on his way home from picking up the motorcycle when the accident occurred. His family was devastated by the loss and his younger brother Jordan decided to commemorate his death with a contribution to the fire department.

The dedicated sixteen year-old worked closely with his consultant at Stewart Signs to complete the purchase with the help of his mother. Jordan was meticulous to pick out every detail of the sign from the color paint to the logo and font used. A plaque was placed on the legs of the sign that reads "In Memory of James Terrier, Jr.".

Jordan also kept a scrapbook of the entire process. The Stewart Signs factory took pictures of each stage of the signbuilding process and his mother helped him to even keep receipts from various moments. "I was driving by the fire house and they let me have the honor of mailing [the approved sign sketch] so I did it certified. I got the receipt back for Jordan's scrapbook that way" said Lisa Terrier. "I even took a picture of the mail attendant doing it. He laughed and went with it. The post office even took a collection so they know it's important to us."

The fire department plans to use the new sign to alert the community of hazardous weather conditions and promote local events such as carnivals or fundraisers. The group is especially proud to post messages that welcome back soldiers and sailors who are home on leave.